Roman is a 22 years old sportsman, he is young and healthy, and he is illustrating the blood state of a young, healthy person. Even HE has Epstein Barr virus in his blood, but he provides a reference point for the two older people.

Blood drawn pre-Metadichol. The red blood cells all appear healthy, round, well-spaced and without deformations. 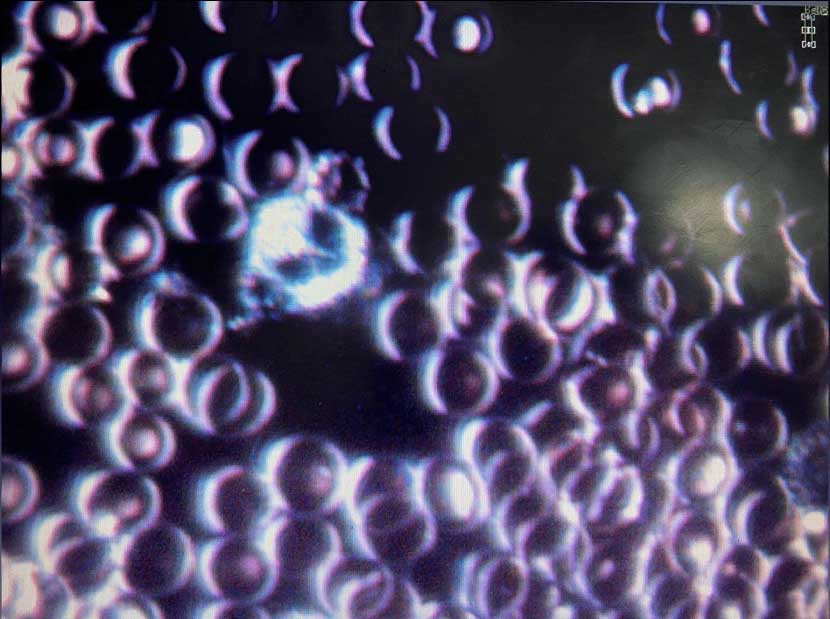 Pre-Metadichol. Another image, again red blood cells all appear healthy, round, and without deformations. 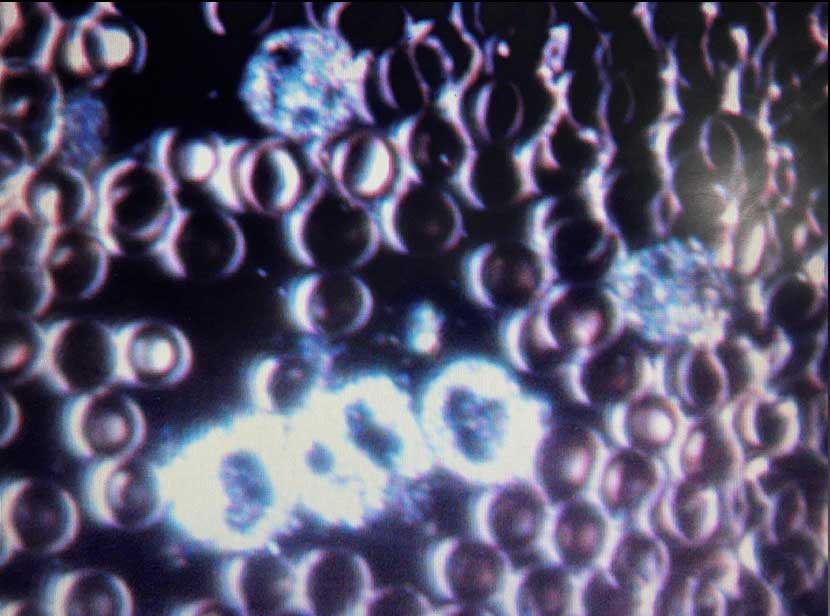 Pre-Metadichol. Again all appear healthy, round, and without deformations. 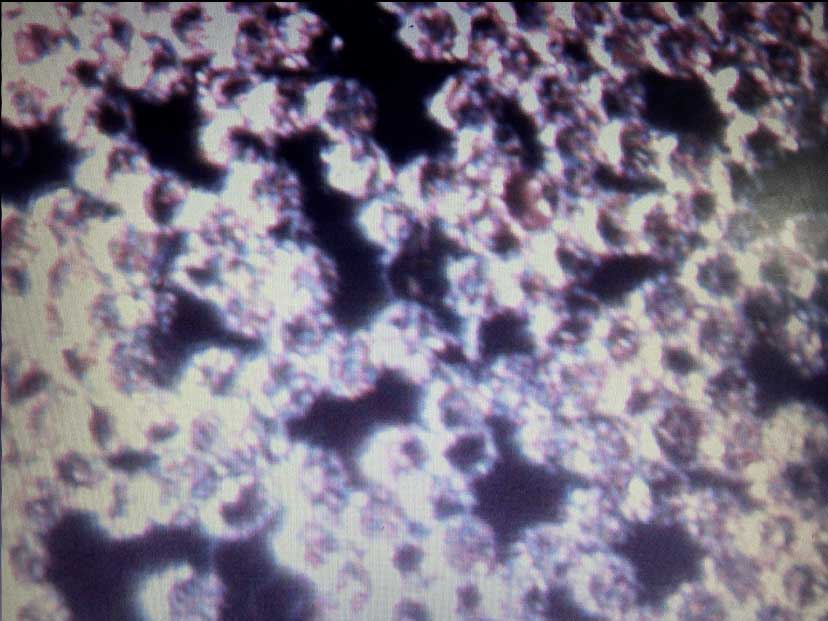 The presence of an infection of Epstein Barr Virus is visible on this part of the blood sample (evidently visible through the small white dots enclosed in the cells- cell clumping is common where EBV infection is found). 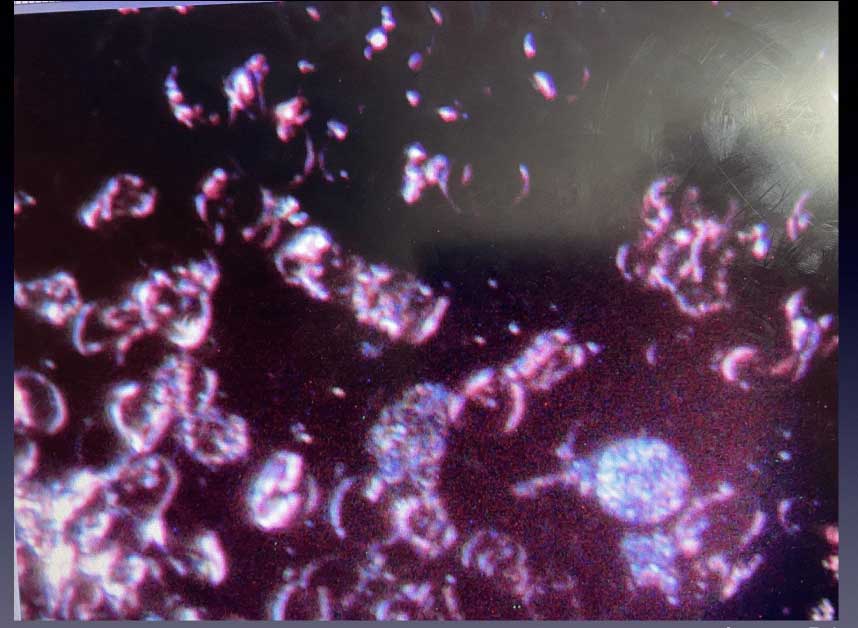 The blood 20 minutes after just 3 drops oral administration of Metadichol shows an active motility of the red blood cells. Normal examination of the blood always shows static red blood cells. The cells also appear to be normal here as in the first pictures 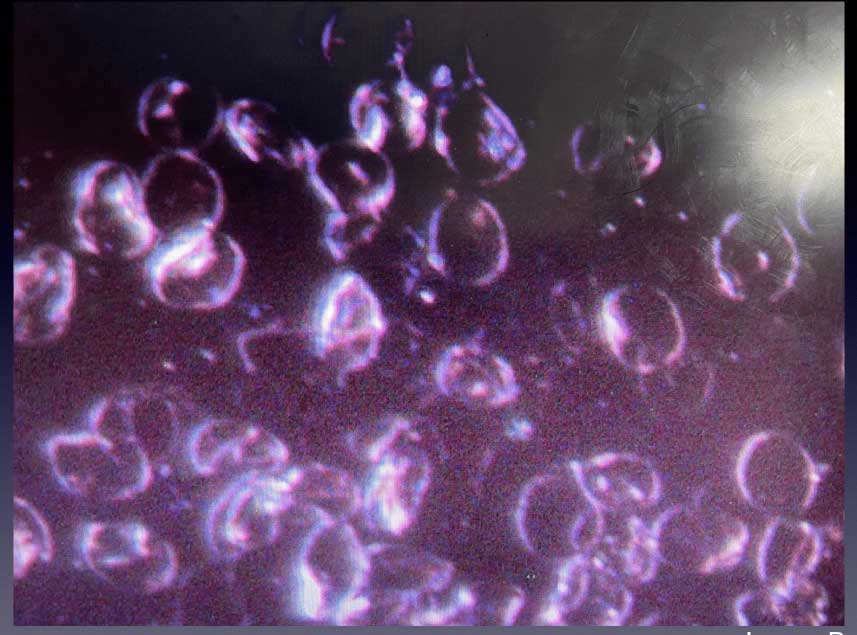 The blood 20 minutes after 3 drops, oral administration of Metadichol shows in this section of the blood sample a sudden deformation/destruction of some red blood cells. This is very unusual to be seen in a healthy blood sample and is the result of the cells dying off after the Metadichol has removed the enclosed infection. These dead cells were nowhere to be found in the first sample.

20 mins post-Metadichol. The remains of the Epstein Barr infection can be clearly seen here in this image as well as dead cells within which they were once enclosed.

A second video of another area with normal cells shows yet again that the blood itself has been energised by the Metadichol into a blood “super-highway”.

The following two examples show “before and after” visual live blood tests using a dark-field microscope to visually ascertain any effects of Metadichol® in vivo on living blood. Both tests were done using 6 sprays of Metadichol 0.5% taken orally with blood extracted before application, then 23 minutes after absorption. 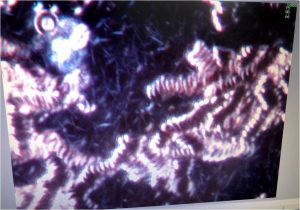 In this first image it is easily observed that the red blood cells are abnormally stacked together in long chains. This stacking results in a drastically reduced useful Red blood cell surface area and independent movement thereby severely restricting the Red blood cells’ ability to carry oxygen/information to all parts of the body.

The tight stacking makes it almost impossible to observe any activity/inclusions within the red blood cells themselves.

Slightly upper left of center a dark area filled with bluish, long crystalline/thread like objects was observed. These objects indicate oxidative stress in the blood/body.

Every part of the first blood sample observed had a clearly visible background filled with these static objects. There were other observations F-53 shared about this image of secondary importance. 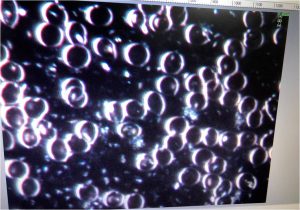 It can be seen here in the second image 23 minutes after taking Metadichol that the red blood cells are suddenly free to move independently with the resulting optimal surface area now visible. Also to be clearly seen is the COMPLETE absence of oxidative stress in the background, which in fact she could not find anywhere at all in the second blood sample.

Her astonishment at these facts was clearly evident while examining her own blood, exclaiming that she had never seen anything act this fast or as thoroughly.

Other, possibly more subjective observations that were shared by F-53 10 minutes after she took the 6 sprays were:

1. She sensed sudden light (as in luminescence in her body).

2. Sudden clarity in her thinking.

3. Sensed subtle energy, tingling and movement within her body.

M-62 suffers from a number of health issues, diabetes type 1, hypertension, Epstein Barr virus (glandular fever etc.) infection. He reported that his blood pressure can be as high as 260/120, which is a hugely debilitating factor apart from the diabetes. In the first pre-metadichol image below the clumped red blood cells can be clearly seen most likely caused by a significant Epstein Barr viral infection.

Only 23 minutes later a completely different blood image appears, absent any visual infection around and within the red blood cells now. Not only are they able to move freely, but moving at a very fast rate across the image field. The videos on the last page will show this.

M-62 came downstairs 15 minutes after the metadichol and reported that he was dizzy when standing up from a seated position, he then measured his blood pressure which was (for him) an astonishing 121/78. This initial drop in blood pressure (BP) has been observed in some people after taking the initial dose however the norm is that BP does gradually drop to a normal level over a 12 week period.

Another 40 mins were spent at their house and 15 mins before leaving M-62 felt much heat in his body and his face looked quite flushed.

This would confirm the sudden motility seen in his second blood picture as it seemed that his circulatory system was suddenly activated.

This short report of two cases has confirmed for all present that there is no doubt as to Metadichol’s immediate effect upon human blood and the circulatory system with what appears to be a different reaction according to what each person needs. While the observed reactions of only two people do not statistically make a whole study the experience of her thousands of observed blood specimens do bring these, especially to her, astonishing results firmly out of the anecdotal realm. 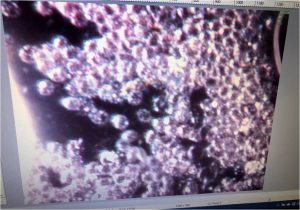 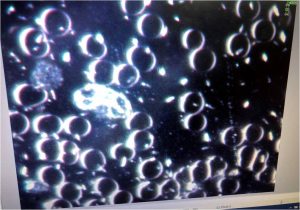 After 23 minutes another drop of blood was drawn and the image not only shows a dramatic absence of the white dots as well as a separation of all the red blood cells. Just as astonishingly his red blood cells appeared to show rapid motility everywhere on the screen.

This short video shows F-53 moving around the slide (the sudden blurs) seeing if the state of the red blood cells is consistent which it was.

Again F-53 looks around the slide (sudden blurs) to see if all areas are consistent. When the image is still the rapid, fluid movement of the red blood cells can easily be observed. The “before and after” videos were done to show the difference in motility of the red blood cells. It appeared as if there was a sudden burst of energy in his blood which was completely absent before the application of metadichol.